Monday will mark the official start of the Big Mess later referred to as World War One.  A week later, on August 4, I will raise my glass to commemorate the hundredth repetition of International Whoops! Day, which marks the addition of the British Commonwealth to the scrum caused by a jerkwad hypernationalist Serbian goofball shooting the wrong Austrian.  (I understand that some Serbs are still a little sore about being told they're kind of responsible for this.  I can't quite feel sorry for them, since they made the assassin a folk hero, but they have half a point.  It isn't as though half of Europe wasn't already poised to throw down at the slightest provocation or anything like that.  At this point, trying to assign blame is a pretty silly thing to do.)

Passing this along, courtesy of a friend who is an avid history buff.  Very cool.  The only downside of sharing this is that now my Cub wants to go take a ride in one of these...in the ball turret gunner position.

She was also quite indignant when we told her that girls weren't originally allowed to fly these in combat.  (She's hazy on the whole concept of 'combat' but understands the first part juuuuuust fine.)

Kickstarters are coming due!  World of Dew is going to ship shortly, and I am gratified to see that my name is in the playtest credits where it ought to be (in the 'v' section).  I mentioned this to Mr. Woerner, and he said something about his mother having been a French teacher for many years.  That explains much!

The Whispering Road is soon to ship.  A little Miyazaki, a lot of improv.

OVA Revised is due to arrive in PDF form on International Whoops!  Day.  And I'll be AFK.  Szipflug!

Far West is in the final stages...not helped by Gareth's downtime, but he's back at it.  Might see it by Xmas, gods willing and the Jade Heavens smile upon the endeavor.

At the risk of becoming a PITA about this, I may start a solo game of Scarlet Heroes and post the results here.  With the demise of 4e, I've half a mind to just go totally Sine Nomine Publications OSR...and Scarlet Heroes was written for OSR one player and GM play.  Is it perfect?  Nope.  But it's got some cool tools to it.

This seems as appropriate a day as any for this story.

A couple of weeks ago, while shopping, I saw an old man wearing one of those baseball caps declaring him to be a World War II combat veteran.  I pointed him out to my Cub and told her that the man had been part of one of those parts of history that Baba likes to study.  We then walked over and politely introduced ourselves, and I asked where and when he'd served.

Turned out he was a B-24 crewman who had served in Italy, and he mentioned that he would be attending the last reunion of the unit soon: the last because so few of them remain. I did my best not to do the drooling fanboy gush (for me, as a gamer, the war is a diversion and a source of entertainment.  For him, it was real life) and wished him a safe trip, along with my best regards to his old comrades in arms.

I forgot to ask his name and the name of his unit.

Tonight I drink two toasts: one for the poor bastards who had to live through hell, and a second for those who never made it home.  (On all sides.  Call me ecumenical, but the other guy is also a dutiful patriot thrown into harm's way, and I don't have to like someone's politics or agree with what their side does to recognize that getting shot at is no damn fun.)

Six years ago today, Diane and I caught a flight to San Francisco and then a second (and much longer) flight to Beijing.  It was not a merry and fun time had by all, between forgetting to set the alarm, not sleeping well, and assorted other slings and arrows of international travel.  (It was also perhaps the strangest way to see the Elizabeth: the Golden Age with Cae Blanchett, because I blacked out a couple of times and only recognized where I was when I woke up because I'd seen the movie twice already.)

Once there, we met two rather amazing people who made our visit to their city both enjoyable and as stress-free as could be hoped: Helen of Beijing and the Amazing Mister Zhao.  We think of them often and hope that they are doing well this Year of the Horse.

Officially not another twenty-four hours, but I wanted to share this.  It isn't mine.  It was done by one of the moderators of a certain roleplaying forum that I frequent, and it strikes a chord.  Does it ever.

While I might bicker a little over some of the wording, and am as guilty as any other cis-male out there of occasionally not being as sensitive as could be hoped, I can but hope that someday soon, those in Sarah's position will no longer fear being judged for what they are...and that I will have helped make that happen in some small way instead of being one of the obstacles they will have had to overcome.

It took me long enough to start listening to the voices of the small.  I never learned so much before I started.  I'm sorry it took me a little longer than it should have to grow up enough to do so.

On a side note, new rule:  whenever I see a headline like "who are the real bigots about gay marriage" I will listen to my intuition that the following commentary will boil down to a lot of whining about tone by someone who cannot tell the difference between punching up and punching down, cherry-picks quotes out of context, and generally ought to contemplate more and talk less.  I will not indulge my morbid sense of curiosity by clicking on said headline only to find that intuition was once again dead on.

Good news: Far West is nearly done!  We backers got the first sixty-five pages or so today, and except for one of the font choices (legible but kind of awkward) it looks pretty sweet.  Well worth the wait.

Not so good news: a good friend died back in September, but it wasn't until late November that I found out about it.  I've started a little tribute to her over here (so that people who don't want to hear my opinions about stuff that isn't game-related don't have to dodge those posts): http://bamboobiscotti.blogspot.com/

The holiday season went well for us--no new crises, no major meltdowns, no civil war over the turkey and presents.  We spent New Years' Eve quietly at home.

The Cub is allowing me to read her The Wizard of Oz at long last.  She's enjoying it, I think...

More to report when I feel a bit less dragged out.

Today marks the 99th anniversary of Britain's decision to throw in over Belgium, thus completing the conversion of a regrettable but moderately contained causus belli between the Dual Monarchy and the Kingdom of Serbia into a general meat-grinder that took far longer, cost far more, and went further than any reasonable predictions could have surmised.  The last living veteran of that war is thought to have died recently, but the echoes are still with us.

I admit to having a long list of 'what if' and 'might have been' questions about that whole mess, but against the musings of a chap like Ferguson, I am prone to a certain fatalistic interpretation of events.  it is all very good to claim that the world would have been better off if England had stayed her hand (England and the Commonwealth, certainly)...but that ignores a lot of people whose primary offense is to have been born somewhere other than Merrie Olde.  Given the assumptions that prevailed at the time, the amount of resources that would be brought to bear, and the general naivete about the scaling factors involved, I find it more likely that if it hadn't been an Austrian Archduke's death, it would have been something else...and sooner rather than later.

...it's the fifth anniversary of Beijing Day, more or less!

Where these two disreputable scallywags 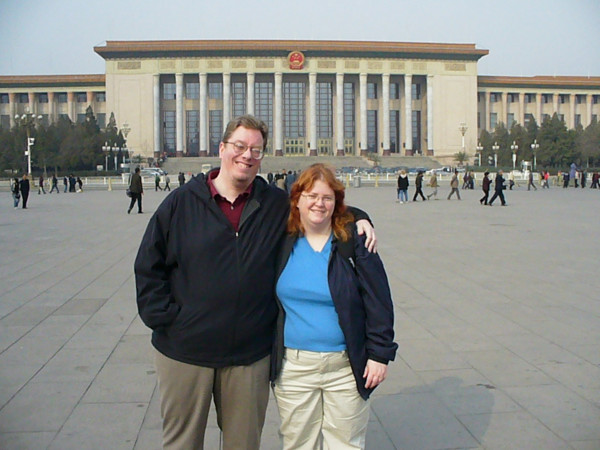 with the help of this charming damsel 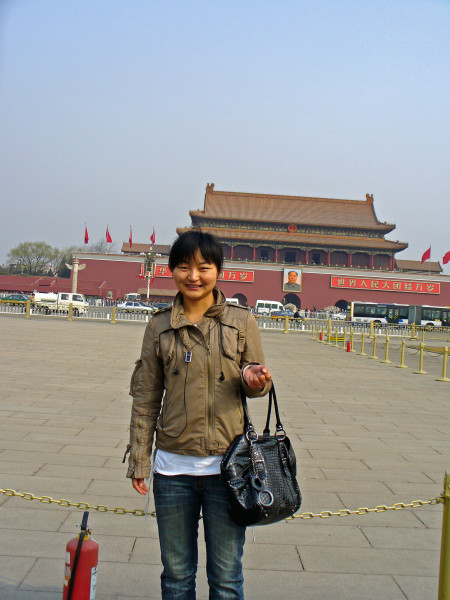 and this madcap wheelman of great proficiency and few words 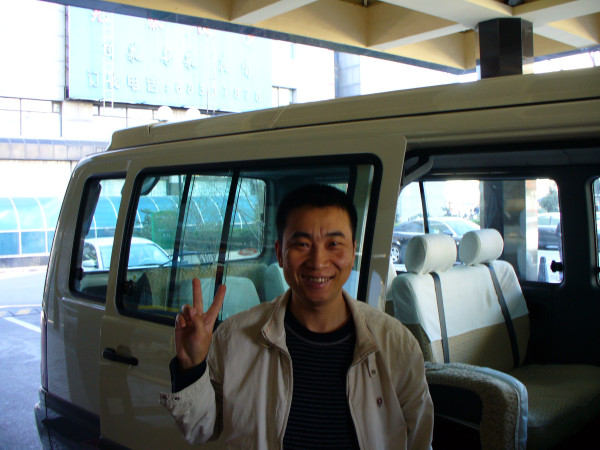 got to enjoy their last days as a conjugal couple by playing tourist in a city the size of Luxembourg.  Or maybe Belgium.

By a curious coincidence, I happened to be researching something mostly inconsequential on the 'Net last night not long after 9pm PST, and pulled up google to make quite certain of my sources. There I met the wondrous sight that was the chosen google doodle for March 11, 2013...a lovely little tribute to the same man whose work provided so much merriment for me this past weekend.

I should have a Pan-Galactic Gargle Blaster in his honor, but just one of those is enough to get me to attempt rapping Vogon poetry whilst freestyling bistromathic improbability equations. In short, not a good idea.

I am become the Answer to Life, the Universe, and Everything!

And as my co-workers can attest after Friday, I know where my towel may be found.

Which is to say that today is my 42nd birthday, which for all that and a bag of chips nets me a free cup of coffee at Starbucks and a whole lot of gratuitous Douglas Adams references, particularly those about the answer to multiplying six by nine in a base-thirteen number system.

Metcha Day is in about two weeks. So is Parent Day. And those combined are still the best present I've ever gotten, even considering that it was at least halfway self-purchased.

In other news, that long-term writing project I'm in with Mr. Webster and Mr. Freeman is still going strong, and now that my creativity circuits are responding again, I'm back in with a vengeance. Also of note that Jim is now up to the third novel based on our work, and that contains a brief cameo by one of my characters and lingers on a region I was 'quite helpful' in developing. I still owe him reviews on Amazon UK, which are going to be a bit awkward to write since I will have to avoid in-jokes and references to that time with the rampant yak and the tub of hair removal salve and that crotchety old Urlan squire...

This year, my birthday present to myself is THE Ed Texiera's newest offering, Star Navy. It looks like it's gonna be the Chain Reaction response to Full Thrust, just as the original 5150 was for StarGrunt. (Don't get me wrong--I LIKE Full Thrust. I like Dirtside and Stargrunt a great deal. But I like Ed's stuff a little better. The ability to pull off an entire fleet-on-fleet fight in less than two hours is a good thing for busy schedules!)

And it is, it is, a wonderful thing to be a pirate princess!

Behold, ye swabs and scallywags, the Crown Princess of Transshipped Goods...a few months late, on account of someone having broken her arm after falling from the monkey-bars at recess right before our officially scheduled return trip to Nasty Jack's Antiques.

Anyway, she was her usual cute self, and the photographer had a ball shooting her while Baba and Mama finished changing (with varying degrees of success). She was a good little model, very photogenic and helpful. As you can see, she was trying hard not to burst out into delighted squealing laughter right when this was taken: 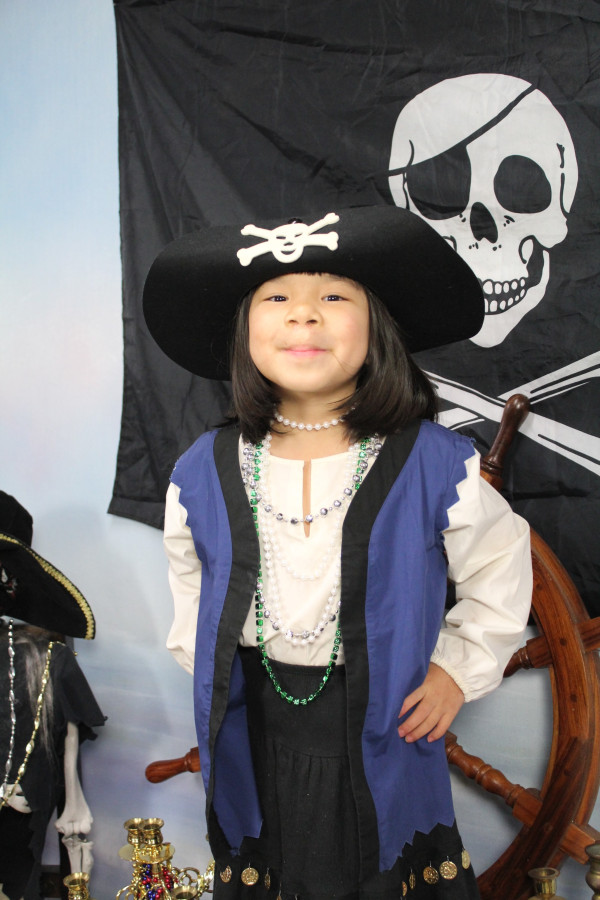 Not sure what we'll do next trip, but she was eagerly fondling this bright pink feather boa she spotted, so it'll be Gangster and Molls, most likely.
Collapse